Visualization description by Hans Segura (MPI-M): Clouds are a crucial component of the Earth system since they play a role in the energy balance by limiting the amount of energy entering and leaving the system. The water cycle is also related to clouds. Thicker clouds contain a considerable amount of water that will fall as precipitation. For many decades, vertical motion, involved in the deep convection process, was parameterized, affecting the behavior of convective clouds in climate models. This means that clouds were not able to interact directly with the atmospheric circulation or winds at different levels of the atmosphere. In recent years the development of storm resolving models, capable of resolving deep convection processes, led to a better representation of clouds and the way they interact with winds. Using the storm resolving model ICON with a resolution of 5 km and coupled to the ocean, we can see this interaction, which we name “the global dance of clouds and winds”. 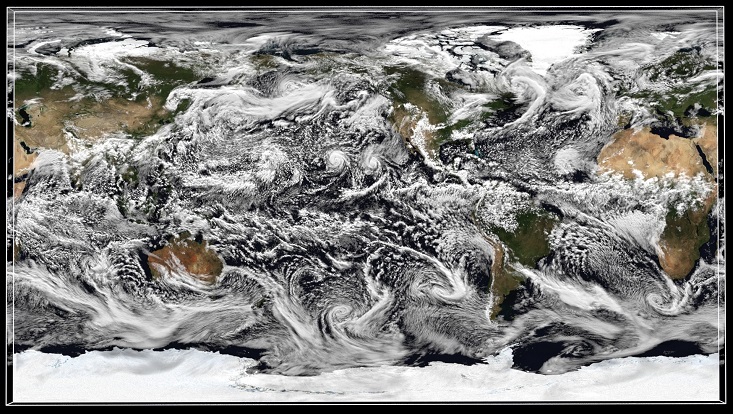 This dance is ubiquitous, observed from the equator to the poles. In the mid-latitude, tracking clouds is to follow the weather patterns typical of these regions of the Earth. We can also observe clouds having the shape of a cyclone and dying near the poles. These are called extratropical cyclones and are prominent meteorological events in the mid-latitudes, mostly associated with extreme precipitation events. The storm resolving model ICON also allows us to observe the rivers in the sky, which are known as atmospheric rivers. These rivers are noticed in the video as filaments of clouds coming from the tropics connecting the tropics and the extratropics, revealing the pathway of how moisture is transported from the most humid region in the world, the tropics, to the extratropics.

In the tropics, most of the clouds go in the opposite direction than in the mid-latitudes, which means to the west. Out of the equator and over tropical oceans, clouds, indeed, are highlighting the region where trade winds predominate. Those winds are in the lower layer of the troposphere and blow in a southwestward direction in the Northern Hemisphere and a northwestward direction in the Southern Hemisphere, and those winds were used for many centuries for sailors coming from Europe or Africa to the Americas. Typical clouds accompanied by those winds are shallow clouds, which are observed in the video as small packages of clouds traveling in the direction of the wind.

Trades winds will converge in a deep convective region known as the Intertropical Convergence Zone or ITCZ, which is identified as a “continuous band of clouds” at the equator and mainly located over the Indian, Pacific, and Atlantic oceans. From July to September, the ITCZ in the Eastern Pacific gives us a spectacular show of cyclones moving poleward, easy to follow by the clouds’ signature.

Over the land, clouds have a strong diurnal behavior, with a notable “clouds’ explosion” in the afternoon. This is a typical consequence of the strong solar radiation forcing over land. As observed in the video, the explosion is more distinguishable in the tropics, in particular over the Congo and the Amazon rainforests. Watching land cloud explosion, we can think as if it is the breathing of the earth.