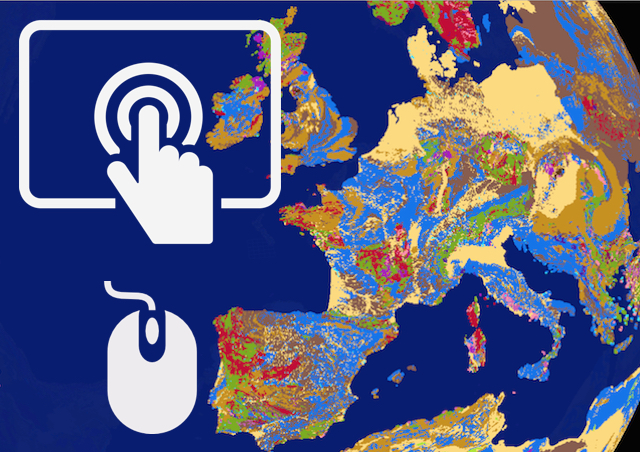 The high resolution lithological map of the world is based on the Global Lithological Map database v1.1  and presents a very accurate picture of the Earth’s crust beneath its thin surface layer [1, 2]. The characteristics of rocks are represented approximately 100 times more accurately than in previous maps. The global rock type information was translated into 16 lithological classes and numerous subclasses, which can be combined in more than 400 different ways. Therefore, the new map offers an important database to model various processes at the Earth surface as well as assessing geohazards more precisely.

The interactive global lithological map can be viewed at lithomap.cen.uni-hamburg.de .  Users are able to rotate, as well as zoom in/out the globe with the help of the mouse or touch device gestures. Short instructions are provided under the “Help” tab, situated in the lower left corner of the web page.  Due to the WebGL technology [3], the rendering takes place on the client device, therefore the rendering performance will depend on the parameters of the client system.

The high resolution of the global lithological map translates to a considerable amount of data:  over 214 million points, which we stored for our visualization in a point cloud format. In order to achieve the interactive rendering of millions of points in a web browser, we need to be able to quickly access, load and display only the relevant part of the point cloud.

Thus, in a preprocessing step, the data set was spatially partitioned with the help of an out-of-core algorithm [4, 5] that stores various levels of detail of the original model in a hierarchical octree data structure [6]. This structure makes it possible to identify and stream to the clients only the points inside the viewing frustum, while the sampling will take place at resolutions depending on the distance of these points to the camera. That is, regions closer to the viewer will be rendered at higher level of detail, while distant regions will be rendered at lower level of detail.